After capturing the Kretan bull, Herakles was to steal the Mares of Diomedes. In one version of the story, Heracles brought a number of youths to help him. They took the mares and were chased by Diomedes and his men.

Herakles was not aware that the horses, called Podagros (the fast), Lampon (the shining), Xanthos (the blond) and Deinos (the terrible), were kept tethered to a bronze manger because they were wild; their madness being attributed to an unnatural diet of human flesh. Some versions say that they expelled fire when they breathed. They were man-eating and uncontrollable, and Herakles left his favoured companion, Abderus, in charge of them while he fought Diomedes, and found out that the boy was eaten. In revenge, Herakles fed Diomedes to his own horses, then founded Abdera next to the boy's tomb.

In another version, Herakles stayed awake so that he didn't have his throat cut by Diomedes in the night, and cut the chains binding the horses. Having scared the horses onto the high ground of a peninsula, Heracles quickly dug a trench through the peninsula, filling it with water, thus making it an island. When Diomedes arrived, Heracles killed him with an axe (the one used to dig the trench), and fed the body to the horses to calm them.

Both versions have eating make the horses calmer, and Herakles took the opportunity to bind their mouths shut, and easily took them back to King Eurystheus, who dedicated the horses to Hera. In some versions, they were allowed to roam freely around Argos, having become permanently calm, but in others, Eurystheus ordered the horses taken to Olympus to be sacrificed to Zeus, but Zeus refused them, and sent wolves, lions, and bears to kill them. Roger Lancelyn Green states in his Tales of the Greek Heroes that their descendants were used in the Trojan War. After the incident, Eurystheus sent Herakles to bring back the Girdle of Hippolyta. 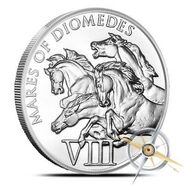 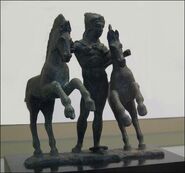 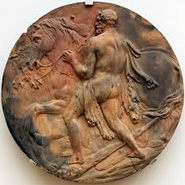 Herakles having defeated Diomedes about to feed them to Diomedes Mares
Add a photo to this gallery
Retrieved from "https://greekmythology.wikia.org/wiki/The_Eighth_Labor:_Steal_the_Men_Eating_Mares_of_Diomedes?oldid=75605"
Community content is available under CC-BY-SA unless otherwise noted.