The Keres are the Goddesses of violent or cruel death (death in battle, by accident, murder or ravaging disease). The Keres were agents and sisters of the Moirai, they craved blood and feasted upon it after ripping a soul free from the dead bodies and sending it on their way to Hades. Thousands of Keres haunted the battlefield, fighting amongst each other. The Keres had no absolute power over the lives of men and women, but in their desire for blood would seek to cause death beyond the plans of fate. Zeus and the other gods could stop them in their course or speed them on. The Olympians are often described standing by their favorite champions in battle, beating the clawing death spirits. Some of the Keres personified epidemic diseases, in plague filled areas. The Keres were depicted as fanged, taloned women dressed in bloody garments. 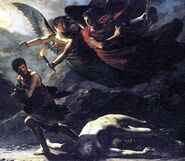 Retrieved from "https://greekmythology.wikia.org/wiki/The_Keres?oldid=78585"
Community content is available under CC-BY-SA unless otherwise noted.