Fata or Parcae
The Moirai (Moirae) were the three goddesses of fate who personified the inescapable destiny of man. They assigned to every person his or her fate or share in the scheme of things. Their name means "Parts." "Shares" or "Alottted Portions." The individuals were Klotho (Clotho), the "the Spinner," who spun the thread of life, Lakhesis (Lachesis), "the Apportioner of Lots", who measured it, and Atropos (or Aisa), "She who cannot be turned," who cut it short. Zeus Moiragetes, the god of fate, was their leader.

At the birth of a man, the Moirai spun out the thread of his future life, followed his steps, and directed the consequences of his actions according to the counsel of the gods. It was not an inflexible fate; Zeus, if he chose, had the power of saving even those who were already on the point of being seized by their fate. The Fates did not abruptly interfere in human affairs but availed themselves of intermediate causes, and determined a lot of mortals not absolutely, but only conditionally, even man himself, in his freedom was allowed to exercise a certain influence upon them. As man's fate terminated at his death, the goddesses of fate become the goddesses of death, Moirai Thanatoio.

The Moirai were independent, at the helm of necessity, directed fate, and watched that the fate assigned to every being by eternal laws might take its course without obstruction; and Zeus, as well as the other gods and man, had to submit to them. They assigned to the Erinyes, who inflicted the punishment for evil deeds, their proper functions; and with them, they directed fate according to the laws of necessity.

As goddesses of birth, who spun the thread of life, and even prophesied the fate of the newly born, Eileithyia was their companion. As goddesses of fate, they must necessarily have known the future, which at times they revealed, and were therefore prophetic deities. Their ministers were all the soothsayers and oracles.

As goddesses of death, they appeared together with the Keres and the infernal Erinyes.

The Moirai were described as ugly, old women and sometimes lame. They were severe, inflexible and stern. Klotho carries a spindle or a roll (the book of ate), Lakhesis a staff with which she points to the horoscope on a globe, and Atropos a scroll, a wax tablet, a sundial, a pair of scales, or a cutting instrument. At other times the three were shown with staffs or sceptres, the symbols of dominion, and sometimes even with crowns. At the birth of each man, they appeared spinning, measuring, and cutting the thread of life.

The Romans name for the goddesses was Parcae and the names of the individuals were Nona, Decuma and Morta.

In later Version of greek Mythology, the Graeae were descniled of beautiful apart from the fact that they had only one Eye.(They all have teeth in the version). This Incarnation of the Graeae was not all malevolentand evil like the Original version. They willengly told Persues the whereabouts Medusa. Since good look and personalities don´t fit the Characters, this verion of the Graeae has been generally ignored by modem day media.

The Graeae are living

in a Cavern in the Mountains of the north of Joppa and eat enyone coming to visit them. When the Plague of Calibos infested the City, the Queen Quassiopei sent Ambassadors to the Witches in order to make a solution, but they all ate all of them. After the goddess Thetis demanded Andromeda to be sacrficed to the Kraken, Persues decides to go see the Graeae to find a way to kill him.

lives in the Garden of Stygia where the Kraken vanquished the Titans. After Hades declared Argos , Persues and a few Soldiers go find the Graeae, who are they only one to know to defeat the Kraken. When they arrivedat their lair, the 3 Graeae approach them will hostillity. Persues interrogates about the Kraken but they demid a sacrifice in exchange for they answer and attack him and his Soldiers. Theycapture one of them in order to eat him however Perseus manages to catch them magic Eye and obliges them to let the Soldier go and to reveal how to into kill the Kraken. 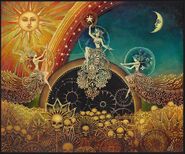 The Moirae, drawn by author George O Connor.
Add a photo to this gallery
Retrieved from "https://greekmythology.wikia.org/wiki/The_Moirai?oldid=78519"
Community content is available under CC-BY-SA unless otherwise noted.