The Muses were nine daughters of Zeus and Mnemosyne. They were goddesses of entertainment. Their job was to entertain the gods on Mount Olympus. The Muses live on Mt. Helicon. 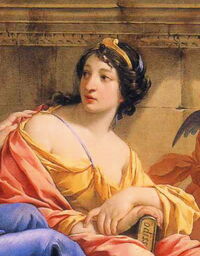 Kalliope (Gr:Καλλιοπη), often spelled Calliope is the Muse of epic poetry, and the daughter of Mnemosyne and Zeus. She is believed to be Homer's muse, the inspiration of The Iliad and Odyssey. One account says Kalliope was the lover of the war god Ares, and bore him several sons: Mygdon, Edonus, Biston, and Odomantus (or Odomas), respectively the founders of Thracian tribes known as the Mygdones, Edones, Bistones, and Odomantes. 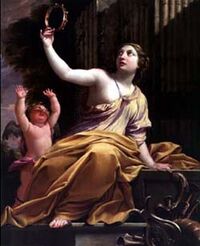 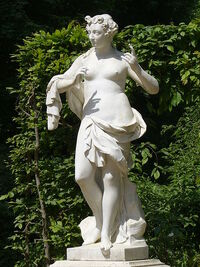 Euterpe (Ευτερπη) was one of the Muses, the daughters of Mnemosyne, fathered by Zeus. Called the "Giver of delight", when later poets assigned roles to each of the Muses, she was the muse of music. In late Classical times she was named muse of lyric poetry and depicted holding a Double-Flute. A few say she invented the aulos or double-flute, though most mythographers credit Marsyas with its invention. 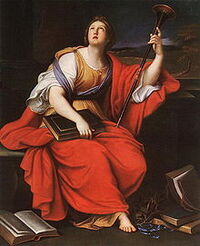 Kleio (Clio) (Κλειω) is the Muse of history. Like all the muses, she is a daughter of Zeus and Mnemosyne. She had one son, Hyacinth, with one of several kings, in various myths - with Pierus, King of Macedon, or with king Oebalus of Sparta, or with king Amyclas,progenitor of the people of Amyclae, dwellers about Sparta. Some sources say she was also the mother of Hymenaios. 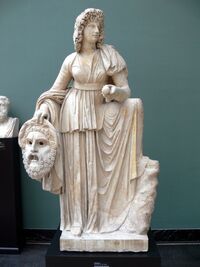 'Melpomene (Μελπομένη) is the Muse of Tragedy, for which she is best known now. Her name was derived from the Greek verb melpô or melpomai meaning "to celebrate with dance and song." She is often represented with a tragic mask and wearing the cothurnus, boots traditionally worn by tragic actors. Often, she also holds a knife or club in one hand and the tragic mask in the other. She is also the mother of several of the Sirens, the divine handmaidens of Persephone who were cursed by her mother, Demeter, when they were unable to prevent the kidnapping of Persephone by Hades. 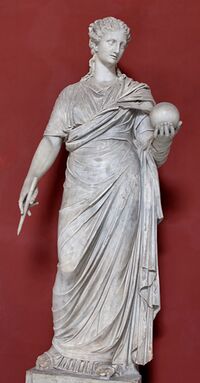 Ourania (Ancient Greek: Ουρανιη) is one of the Muse. Her spheres of influence are astronomy and astronomical writings. In this guise she was depicted pointing at a celestial globe with a rod. 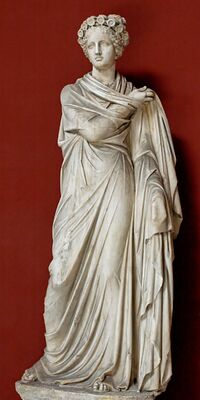 Polyhymnia (Πολυμνια) is the Muse of hymns. She is daughter of Zeus and Mnemosyne. Contents[hide] 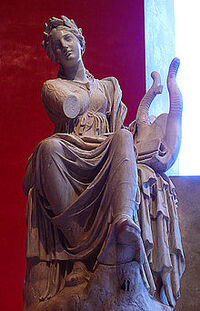 Terpsikhore (Τερψιχορη) is the muse of Dance and goddess of sing. 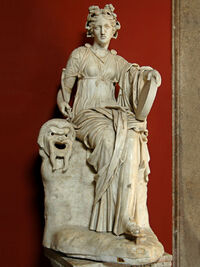 Thaleia (Θαλεια) is the muse of comedy and idyllic poetry. Her name means flourishing in this context, because she praises in her songs flourish through time. She was the eighth born muse of the nine. She is also the daughter of Zeus and Mnemosyne.Template:-

When Thamyris, a bard, boasted that he could surpass the Muses in singing, the Muses blinded him and took away his musical and poetical skills.

Retrieved from "https://greekmythology.wikia.org/wiki/The_Muses?oldid=76870"
Community content is available under CC-BY-SA unless otherwise noted.