Whistling merrily at his success so far, Heracles was then sent to capture the bull by Eurystheus as his seventh task. He sailed to Crete, whereupon the King, Minos, gave Heracles permission to take the Kretan Bull away and offered him assistance, which Heracles denied because of pride, as it had been wreaking havoc on Krete by uprooting crops and leveling orchard walls. Heracles snuck up behind the bull and then used his hands to strangle it, and then shipped it back to Athens. Eurystheus, who hid in his pithos at first sight of the creature, wanted to sacrifice the bull to Hera, who hated Heracles. She refused the sacrifice because it reflected glory on Heracles. The bull was released and wandered into Marathon, becoming known as the Marathonian Bull. Theseus would later sacrifice the bull to Athena and/or Apollo. Eurystheus then sent Heracles to bring back the man-eating Mares of Diomedes. 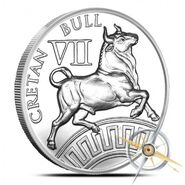 800px-Herculean effort.jpg
Add a photo to this gallery
Retrieved from "https://greekmythology.wikia.org/wiki/The_Seventh_Labor:_Capture_the_Kretan_Bull?oldid=75624"
Community content is available under CC-BY-SA unless otherwise noted.