For his sixth labor, Herakles had to get rid of the Man-Eating Stymphalian Birds. Herakles traveled to the island of Stymphalos. Heracles could not go too far into the swamp, for it would not support his weight. Athena, noticing the hero's plight, gave Heracles a set of castanets which had made especially for the occasion. Heracles shook the Castanets and frightened the birds into the air (other versions of the story say that Herakles was given a pair of symbols which he banged loudly). Heracles then shot many of them with his arrows. The rest flew far away, never to return. The Argonauts would later encounter them. Heracles then brought some of the birds he had killed to Eurystheus. He then sent Heracles to capture the Cretan Bull and bring it to him. In order to get them out of the trees Herakles first started banging cymbols 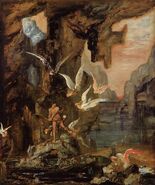 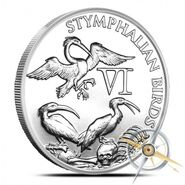 800px-Kayseri Herakles Lahdi 10.jpg
'Hercules and the Stymphalian Birds' by Gustave Moreau, c 1872.jpg
Add a photo to this gallery
Retrieved from "https://greekmythology.wikia.org/wiki/The_Sixth_Labor:_Rid_the_Island_Stymphalos_of_the_Man-eating_Birds?oldid=75627"
Community content is available under CC-BY-SA unless otherwise noted.