Herakles' third labor was to capture the elusive Kerynitis Hind. Hera was greatly angered to find that Heracles had managed to escape from the claws of the Nemean Lion and the fangs of the Lernaean Hydra, and so decided to spend more time thinking up a third task that would spell doom for the hero. The third task did not involve killing a beast, as it had already been established that Heracles could overcome even the most fearsome opponents, so Eurystheus decided to make him capture the Keryneian Hind, as it was so fast it could outrun an arrow.

After beginning the search, Heracles awoke from sleeping and he could see the hind from the glint on its antlers. Heracles then chased the hind on foot for a full year through Greece, Thrace, Istria and the land of the Hyperboreans. In some versions, he captured the hind while it slept, rendering it lame with a trap net. In other versions, he encountered Artemis in her temple and she told him to leave the hind and tell Eurystheus all that had happened and his third labor would be considered to be completed. Yet another version claims that Heracles trapped the Hind with an arrow between the forelegs of the creature.

Eurystheus had given Heracles this task hoping to incite Artemis' anger at Heracles for his desecration of her sacred animal. As he was returning with the hind, Heracles encountered Artemis and her brother Apollo. He begged the goddess for forgiveness, explaining that he had to catch it as part of his penance, but he promised to return it. Artemis forgave him, foiling Eurystheus' plan to have her punish him.

Upon bringing the hind to Eurystheus, he was told that it was to become part of the King's menagerie. Heracles knew that he had to return the hind as he had promised, so he agreed to hand it over on the condition that Eurystheus himself come out and take it from him. The King came out, but the moment Heracles let the hind go, it sprinted back to its mistress, and Heracles left saying that Eurystheus had not been quick enough. Eurystheus, upset that Heracles had managed to overcome yet another creature, told him to bring the fearsome Erymanthian Boar back to him alive. 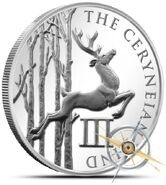 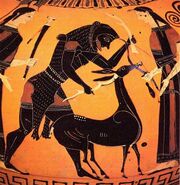 Athenian plate with Heracles and Apollo fighting over the Keryneian hind.jpg
Heracles captura la cierva de Cerinia.jpg
Add a photo to this gallery
Retrieved from "https://greekmythology.wikia.org/wiki/The_Third_Labor:_Capture_the_Golden_Hind_of_Artemis?oldid=75630"
Community content is available under CC-BY-SA unless otherwise noted.