Theseus (Θησεύς) is a demigod. His parents are said to be Aethra (Aithra), and the King Aegeus of Athens and Poseidon. Aethra had slept with King Aegus, then under Athena's instructions, had also slept with Poseidon that night, causing Theseus's father to be both Poseidon and Aegis. Some versions say he is the son of King Aegeus possessed by Poseidon, or simply just Poseidon.

Unlike Hercules who was hailed as a hero for his strength, Theseus was hailed due to his intelligence and wisdom.

As a child Theseus had heard stories of his cousin Hercules and wanted to be a hero like him. As an adult he was brave enough to face the minotaur and save his people.

However Theseus was often driven by his lustful urges and arrogance and making rash decisions out of anger. This included kidnapping Helen of Troy as a child hoping to marry her when she was older, kidnapping the Amazon queen Hippolyta (or Antiope) to be his queen, and later asking Poseidon to kill his so Hippolytus (an act that he deeply regretted later).

Despite this he was also charitable, it was said he was a fine ruler of Athens and kindly took in Oedipus after he had been blinded and expelled from his kingdom.

When Theseus was a child, he was bullied as the other children believed him to have no father or that his father was ashamed of him. When he grew into a young man, he was still bullied. One night, he had a dream of a sea bird that cracked open a clamshell by flying up and dropping it onto a rock. He told Theseus to fight cleverly, using the opponent's gravity and momentum. Afterwards, he told Theseus that his father was Poseidon and Aegus. When he woke, he found his bully and asked him to fight him, and found he could defeat him easily by using the bully's momentum and dodging the blows. Soon, he discovered that a rock with a sword, shield, and a pair of sandals stuck under it had appeared in the middle of town, and every able man was trying to retrieve the items. Unbeknownst to all, the rock had been placed by Aegus. When they saw the scrawny boy next to the large muscled butcher or town champion, they laughed at him, but let him try, astonished when Theseus managed to lift the rock due to his fathers. His mother told him that his father had no legitimate heir other than him, and all of Theseus's fifty cousins were trying, hoping, to get the crown. To prove his parentage, Theseus had to take the sword, shield, and sandals to Aegus, in Athens. To get to Athens, he could have taken a safe sea route or a dangerous land route which would take him by entrances to the Underworld. Being an adventurous young man, he chose to take the land route and on the way, he encountered many robbers and bandits.

Road to Athens aka The Six Labors of Theseus

Periphetes was the first danger Theseus encountered. He is also known as Korynetes or the Club-Bearer. He killed and robbed bypassers with his bronze club. Periphites insisted that his club was pure bronze all the way through. Theseus claimed that it was only a wood club coated with bronze. The prideful Periphites handed Theseus his club to check, which Theseus promptly smashed his head with, and took the club.

At the Isthmus of Korinth, Theseus encountered an outlaw named Sinis, or Pityokamptes (He who bends pine trees). Sinis kills travelers by asking if they could help him hold the Pine tree, and once they grabbed the tree, Sinis would let go and the weak travelers would be flung by the tree, hopefully dropping a sword or a few coins. When Theseus came and Sinus asked him to hold the pine tree, he grabbed it with both his hands and when Sinus let go, Theseus, remarkably, was still holding down the tree. Astonished, Sinis bent down to try to get a closer look at the tree, thinking it was broken, and when Sinis was close enough, Theseus let go and the tree hit Sinis's head, knocking him unconscious. While the giant, sometimes portrayed as simply a large strong mortal, was unconscious Theseus tied each of his limbs to a tree and let go of the trees, tearing Sinis apart.

Theseus encountered Phaea, a crone who bred a sow of monstrous proportions dubbed the Krommyonian Sow . Theseus slew the giant pig and the crone and saved the town of Krommyon.

Skeiron was a bandit who tricked by passers into washing his feet by a cliff face and threatening to kill them if they didn't, and when they knelt, he would kick them off the cliff into the ocean. The by passers are then eaten by Skeiron's giant sea turtle, sometimes said to simply be a sea monster. Theseus saw the turtle and had heard of Skeiron, so when Skeiron started to kick him, he dodged and pulled him over the cliff where he was eaten by his own turtle.

Kerkyon was the king of Elusis who challenged travelers to a wrestling match, and he never lost. He sacrificed the travelers to renew his royal power every year. Theseus and Kerkyon wrestled each other, and Theseus won because of his superior skill. He promptly killed Kerkyon and abolished the sacrifice, since his father was Poseidon.

Prokrustes, the stretcher, was the ultimate perfectionist. He would offer beds to travelers, his bed exactly six feet long (but some say he had two beds of different lengths so you couldn't fit in both exactly). If they were too short he would tie them to the ends of the bed and stretch them until they died (or grew to exactly six feet). If they were too tall, he would chop off the feet and legs. After the night of travelling, Theseus arrived at Prokrustes' house, who offered a bed. Theseus saw the chains and the axe and pushed Prokrustes onto the bed. Prokrustes, being tall, soon had his legs chopped off. Being a kind, merciful, thoughtful young man, Theseus chopped off his head too, so that Prokrustes wouldn't feel much pain.

When Theseus arrived in Athens, he kept quiet about being Aegus's son. He met Medea, who some say is a sorceress. She had married Aegus, and recognized Theseus as Aegus's son. She worried he would be the chosen heir instead of their son Medus. She knew she had to kill Theseus to ensure her son becoming the heir, telling Aegus that Theseus was there to plot against him and kill him. That night at a banquet, Medea and Aegus gave Theseus a cup of poisoned wine. At the last second before Theseus drank, Aegus recognized the sandals, sword, and shield and knocked the cup out of Theseus's hands. They had a happy reunion full of tears and joy, and Medea fled to Asia or was taken away by a chariot pulled by dragons.

Each month, Crete required 6 females and 6 males to be shipped from Athens to Crete in a boat with black sails to feed the Minotaur in Daedalus' Labyrinth. This time, Theseus went to his father and requested to be sent aboard the ship and try to kill the Minotaur. Aegus did not want Theseus to go but could not deter the determined young man and knew how capable he was, so he let Theseus go aboard. Theseus promised to raise white sails if he made it back alive, and Aegus agreed.

At Crete, he met King Minos' daughters. Ariadne fell in love with Theseus and agreed to help him by giving him a golden string that would take them to the Minotaur and back out. After Theseus killed the Minotaur, Minos threw his crown into The ocean and told Theseus to retrieve it, which he did with ease, his father being Poseidon. Athena came to him and told him to leave Ariadne and her sisters behind and to leave in the middle of the night. Distressed with having to leave the girls, Theseus forgot to raise white sails. When Aegus looked out and saw the ship with black sails, he was distraught with grief and threw himself off a cliff into a sea, which is now called the Aegean sea after him.

Theseus, the Son of Poseidon, became the King of Athens. He gave the ruling power to the public, making him popular. He fought alongside Heracles against the Amazons, and abducted one for his wife. Some say that Theseus was an Argonaut, and participated in the Kalydonian Boar Hunt. He slew centaurs. He was the second most powerful hero, after Herakles.

Later he fell in bad company with Pirithous. Theseus kidnapped Helen of Troy, while he reluctantly went to the Underworld with Pirithous, to kidnap Persephone. Hades imprisoned those braggarts and Theseus was saved by Heracles. Theseus became a villain and a tyrannical king, oppressing Athens. He slew his own son in a fit of rage.

Theseus was overthrown in a coup and died in exile.

Theseus' Victory Over The Minotaur 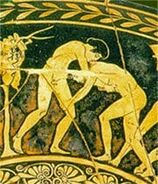 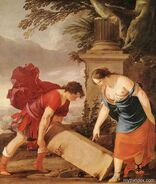 Theseus42.jpg
Athena awakening Theseus who is with Ariadne