Zephyrus or Zephyros (Gr: Ζεφυρος) is the god of the west wind and spring. He is the gentlest of the winds. He lived in a cave in Thrace.

Zephyr was the son of Astraeus and Eos, the goddess of the dawn and he was the father of the spring flowers. His mate was Podarge and together they created the two immortal horses of Achilles, Xanthus and Balius

Zephyrus' most famous myth told the story of his rivalry with the god Apollon for the love of Hyakinthos. One day he spied the pair playing a game of quoits in a meadow, and in a jealous rage, struck the disc with a gust of wind, causing it to veer off course and strike the boy in the head, killing him instantly. Apollon in his grief, then transformed the dying boy into a larkspur flower.

Zephyrus was the wind that guided Aphrodite to the sea of Paphos when she was born and the only wind Odysseus allowed helping him find his way to Ithaca.

Zephyrus appears in the myth of Cupid & Psyche. It was the wind that carried Psyche to Cupid's palace and then later carried her sisters to and from the palace. 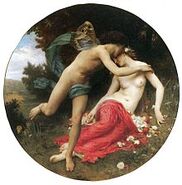 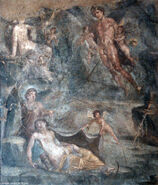 Zephyros (Identifiable by his basket of unripe fruit)

Retrieved from "https://greekmythology.wikia.org/wiki/Zephyros_(Anemoi)?oldid=75279"
Community content is available under CC-BY-SA unless otherwise noted.